Category Archives for "Life after Prison" 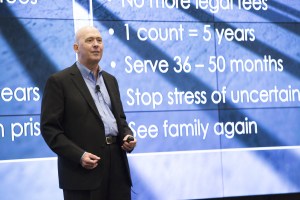 When it comes to ethics, what you don’t know can hurt you.

I was honored to sit down with Jon Tota, CEO of Knowledgelink, to talk about the common ethical traps that can bring people and companies down the wrong path, and how to prevent failures of integrity through training, seminars, and consulting.

In this episode of Learning Life with Jon Tota, hear about my journey of a real estate executive turned-convict turned-ethics expert, who formed a plan to end the slippery slope of bad ethical decisions in the business world during his 28 days in solitary confinement.

This is a great interview for those in the business world that are concerned about the pitfalls that everyday people can find themselves inadvertently in.

Supervised Release Violation Sends a Released Inmate Back to Prison

An older white-collar guy arrived in our unit from California today for a supervised release violation. Alan’s probation officer told him at their first meeting that he hated white-collar defendants.  The PO said he would do everything he could to violate him. What a shock to find out your PO is such an ass!

Alan was three days late with a mandatory monthly report. That was enough to violate him.

Alan was picked up and spent 10 months in a medical unit at a Federal Detention Center in San Bernardino, CA.  The judge yanked his supervised release and ordered him back to prison to serve his supervised release time.  BOP sent him to Butner because he has a lot of health issues. Alan previously did his time at the camp in Jessup, GA.  He has another 10 months or so to complete before being finally released.

All this becomes an issue because all federal inmates serve 85% of their sentence.  At sentencing, judges assess defendants with an additional period of supervision by a probation officer.  Probation officers are officers of the court and supervise released inmates during the remainder of their sentence after release from prison and during their supervised release period.  These officers follow the BOP terms of release until the sentence is completed, and then the court-mandated terms of the supervised release.  These guys have a lot of power over released inmates.

Interestingly, Alan said that there were Jessup campers with long supervised release times that would violate on purpose.  Subsequently, they filed a motion with the court for immediate release. The theory being that the additional time served would do away with all the remaining supervised release.

This is not the only time I have heard of a probation officer intentionally violating an inmate and inventing a reason to legally do so. One of Christine’s friend’s husband was on supervised release. The family owned a farm that the probation officer wanted to own. The inmate’s wife saw the PO put bullets on the fridge during a home visit.  Being in possession of bullets is a clear violation of any inmate’s supervised release. When she confronted the PO, he said, “who are THEY going to believe … you or me?”

Result: the inmate went back to prison and lost the farm that had been in his family for generations! Guess who owns it now?

A friend of mine left the camp on December 20th and wrote me a letter about his halfway house experience.  Joe’s experience is typically the same I hear from other guys so I am sharing it now from his letter.

“My wife and daughters picked me up from Butner on my release date.  I stopped at the house to get some clothes and then went on to the halfway house. I figured I would be there 1-2 weeks, because I had a house, car, phone and a job.  The probation officer had been to my house and recommended home confinement. It turns out I would be at the halfway house until January 27th.

I believe part of the slowdown was that I was there at Christmas and New Year’s. It was a nice place. The beds were bad. The food was good. The people nice. Black and white was about 50/50. The halfway house is a Catholic-run house called Dismas Charities.

I didn’t have to pay for my ankle bracelet. I did have to pay for 25% of my paycheck for rent to the halfway house.  They also required me to put 10% of my check into a savings account. If you had under $100 in the account, they would charge $5 so I put in $100 right away. I still had to put in additional money every pay period. They prorated my paycheck at the end, they want their money.

I had a few weekend passes, the first was 24 hours because it was New Years, I didn’t get to go home at Christmas but Paula and the girls came and brought some lunch. Visitation was from 1-3 Sat/Sun.

Looking for a Job

If you were able to work, you had to be out looking for work. They required you to bring back signatures from employers, if you could.  Many of the employers want you to enter your information online only. People would make a list of 6-8 companies they were going to see.  The guys would then see one or two and, if they lived in Greensboro, would go to their house for the rest of the day.

One fellow worked at night at the coliseum, but would pretend to go job hunting and go to his house during the day.

If you didn’t have a job, you had a job at the house doing dishes, cleaning bathrooms, TV rooms, etc. I cleaned the TV room and then I started working for a friend of mine.

I got my driver’s license when I was released from the halfway house.  It was strange after almost five years not driving. I was nervous around people, anxious even about going to church.

My probation officer is great. I only have to report to him by filling in a questionnaire over the internet on the federal probation website about my finances, expenses, income. It isn’t bad but it has to be done between first and fifth of month. I can go anywhere in North Carolina Central District, which stretches from Greensboro to Virginia border, to Winston Salem, to Raleigh and to Charlotte, If I go anywhere else I have to call and get approved first.”

I have two friends that are leaving on Tuesday so they will be released for Christmas. I am very excited for Bill and Joe.  Both guys will have to go through the “merry-go-round” on Monday. The merry-go-round is obtaining each of the department heads signature to clear them for release. I think this is just a formality since it is not required if you are given “immediate release”.

I’ve previously written that there have been a lot of guys in the past six weeks that have received their immediate release because of the new law equalizing drug sentencing. The BOP really humps it to get the immediate release guys out the front door as soon as possible.  This is generally before midnight, no matter when they receive the court order on that day. What a pleasant surprise that would be to be told suddenly that you are going home!  However, this is not true for those going through the normal release procedures.

Bill kept a lot of books and other personal stuff. He is going home via plane so he can’t take everything with him. A town driver (an inmate trusted with doing errands around the area) will drop him off at the airport. I think he will be going home with only a satchel. Accordingly, Bill has been shipping everything home. He had about 10 or 13 boxes shipped earlier this week.  Bill is retired, handicapped and a Care Level 3, so he is going directly to home confinement.

His probation officer visited his wife’s home to check it out. They want to make sure that it is a stable and permanent home environment. I hope that he settles quickly with his wife, grown children and grandchildren. He’s been through a lot lately and deserves a break.

BOP typically sends everyone home by bus, and they will pay for the ticket. An inmate will have to pay for his own train or plane fare if he goes that route. The BOP doesn’t want released inmates doing side trips on their way home.  If an inmate drives to a halfway house with their family, the BOP calculates the time they think it takes to get home.  The inmate must report to the halfway house at that time. Joe will probably have enough time to drive and have lunch with his family before reporting to the halfway house.

My Blog includes current writings of interest to my work as an ethics expert.  But, the Blog also includes my diary when I was incarcerated at FCI Butner from August 16, 2011, until October 8, 2014.

During this time I had access to a closed inmate email system that I used to write my daily observations to my wife, Christine.

She saved all my emails with the intention of publishing them on butnerprisondiary.com, a blog that we established for this purpose. However, it soon became evident that I was writing about things that could have been very embarrassing to prison officials and, that had these things been told to the outside world, there was a real risk that the prison officials would exact retribution on me. For this reason, we decided to take the original blog down until I completed my supervised release in February 2017.

Accordingly, there is a post date and a diary date for each post if it was written while I was in prison. For simplicity’s sake, I start each diary post with the day it was written.

For a more detailed explanation, see
How The Prison Blog Started page .

Also, please check out my
FAQ About Prison Life page

I am a speaker with a passion to help others improve their ethical decision-making skills.

I am also a consultant helping others who are about to enter prison to prepare for and navigate a very difficult time in their lives. Please read more about my consulting services on my Incarceration Consulting page.

This blog forms the basis of “Butner Prison Diary”, a book about my life in prison. It will be available through this website, initially as an eBook and later in print form.

Please read my About page for more about my background.

Tell Us Your Story

We realize there are a lot of visitors to this site that have their own stories, whether as a spouse or inmate, to tell about their experiences in different prisons and at different security levels.

Please share by sending me an email from the Contact Me page or by completing the form on the Tell Us Your Story page. You never know when your story will help someone else in preparing for, or presently experiencing, some level of incarceration.

My Comments Policy pertains any story that you submit here. Please read it before sending me your story.